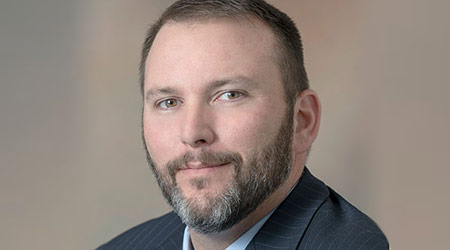 Job description: Responsible for the Central Maine & Quebec's engineering, mechanical and transportation departments in the United States and Quebec. Also responsible for the railroad's newest operation, Katahdin Railcar Services, which has a 24,000-square-foot tank car cleaning and repair facility in Derby, Maine.

Career path: Mowery began as a conductor in 1999 with the Indiana & Ohio Railway. In 2000, he became a locomotive engineer, and four years later a dispatcher and director of train operations. He worked his way up to general manager east for Genesee & Wyoming Inc., where he served as GM of the New England Central Railroad, Connecticut Southern Railroad and Massena Terminal Railroad. In 2015, he joined CMQ as general manager. (CMQ was formed in 2014 after Rail Acquisition Holdings LLC acquired the Montreal, Maine & Atlantic's U.S. and Canadian networks through a bankruptcy proceeding resulting from the 2013 Lac-Megantic derailment.)

Nominator's quote: "Chad is a proven, intelligent industry leader. He's made an unquestionable positive impact on the North American freight-rail industry over the last decade and he will continue to do so over the next two." — Ryan Ratledge, CMQ

How did you end up in the rail industry? Honestly, I heard a commercial on the radio announcing open interviews for CSX. I attended a railroad conductor school at Cincinnati State University, and while I didn't go work for CSX, I did start my career with the Indiana & Ohio Railway.

What career accomplishment are you most proud of so far? The work at CMQ. The history of this property is well-known and publicized. Rebuilding this property and the trust lost with our employees, communities, customers, government agencies and our industry in general has been one of the most unique challenges I have been fortunate enough to be a part of. While you will always have to live with the past, the future is wide open to create the new narrative that people will remember."

What do you hope to be doing or learning in five years? I hope that we are still growing the Central Maine & Quebec and Katahdin Railcar Services brand/franchise.

Who or what has been the biggest inspiration to you in your career? I have been fortunate enough to work with a lot of great leaders in our industry spanning multiple generations. Being able to work directly with John Giles was an awesome opportunity. Our current CEO Ryan Ratledge is an inspiration as he also started as a conductor a few years before me and worked his way through this industry in the Class I and short-line world. Seeing and being a part of the next generation of railroaders has been a daily inspiration.

What do you enjoying doing when you're not at work? I love to coach. I have coached our daughters in softball starting with our oldest daughter in 2004. I have been fortunate enough to coach both our daughters. I love to volunteer and help when I can. I currently serve on the boards of Bangor West Little League, Operation Lifesaver of Vermont, and the New England Railroad Club.