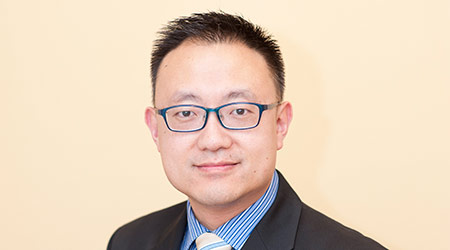 Career path: In June 2003, Mao began his rail career as a summer engineer for the LIRR. In February 2004, he was hired as junior engineer; two years later, he was promoted to project coordinator. In November 2006, Mao became assistant track supervisor for the Port Authority Trans-Hudson commuter-rail system, where he was later promoted to general track maintenance supervisor and track engineer. Mao returned to LIRR in June 2014.

Nominator's quote: "In his time back with the LIRR since 2014, Yifeng has continued to work tirelessly to standardize the LIRR engineering track standards and specifications through his unparalleled expertise in track engineering. [He also improves] product reliability by leveraging operation and maintenance knowledge. ... His commitment to continually excelling and leading to a safer, more efficient and reliable service through railroad science and technology is relentless." — Christopher Calvagna, LIRR

Why did you go into railroading? I always liked trains. Growing up, I was very interested in railroad tracks and read books about Pennsylvania railroad trains and tracks, and stories about Chinese immigrants [who] helped build the transcontinental railroad. When I was studying for a civil engineering degree at City College of New York, I grew more interested in pursuing an engineering career in railroading. I also grew interested in track engineering, because trains run on tracks, and track switches direct where the trains are going. After I submitted my resume to LIRR, an opportunity came up in the summer of 2003, and I began my career in the railroad as a summer engineer, and then as a junior engineer after I graduated.

What career accomplishment are you most proud of so far? I am very honored and privileged that I was recognized and received a certificate of appreciation for volunteering in mentoring students in the New York State Mentoring Program. I was recognized at a special Metropolitan Transportation Authority (MTA) event that was held in conjunction with National Mentoring Month at MTA's headquarters in Manhattan on Jan. 30.

What's an interesting fact about you? I learned how to speak the Khmer language when I volunteered on a missionary trip to Cambodia in May 2005.

Who's been your biggest inspiration in your career? My biggest inspiration came from Steven Abramopaulos, who was a mentor to me in my railroad career. He is committed to utilizing the railroad industry's best practices to update and standardize track standards ... in order to operate a safe, efficient and reliable railroad."

What do you hope to be doing or learning in five years? In five years, I hope to obtain a master's degree in business or transportation management. I hope to be in a position to make and execute sound decisions based on engineering and science that would yield higher return on the investment for the LIRR, the MTA, and its stakeholders and customers. The goal is to address all operational, maintenance and future needs by implementing an explicit and visible way of consistently doing things in a business-like way.

This also would involve collaborating with people from different departments and disciplines in the railroad to reaffirm and make commitments to repair, maintain, upgrade and replace existing LIRR assets and infrastructure.