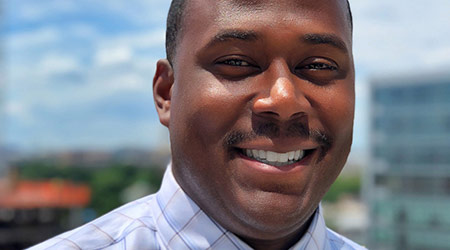 Career path: Fresh out of college, Bennett started as a transportation management trainee at Norfolk Southern Railway. After a few years working as a trainmaster, he transitioned into passenger railroading with Keolis Rail Services Virginia, where he served as operations manager. He later joined DCTA as director of transit operations before becoming assistant vice president of rail operations. Bennett moved on to the DDOT in late May.

Why did you go into railroading? While I was researching career options in college, it seemed like an interesting and non-traditional career path. It was neat to learn about the various products that are transported via rail, and how people rely on rail to get to work in the major cities.

What career accomplishment are you most proud of so far? In 2016, I managed DCTA's rail operations and maintenance procurement. I managed the entire process, [including] meeting with prospective contractors, authoring the new RFP that emphasized innovation such as a real-time Key Performance Indicator Dashboard, evaluating all proposals, managing contractor mobilization and demobilization activities and ensuring operational cohesion. This was the biggest contact in the history of the agency, totaling $196 million.

What do you hope to be doing or learning in five years? I hope that I am working in a senior management role in the transportation industry. I would like to learn about creative ways to assist transit agencies with funding.

Who or what has been the biggest inspiration to you in your career? Raymond Suarez, chief operating officer at DCTA. He taught me about the business side of transportation. Additionally, he showed me that the most valuable aspect of an organization is its people.