Shortly before the first anniversary of the horrific Montreal, Maine & Atlantic Railway (MMA) derailment in Lac-Mégantic, Quebec, on July 6, the railroad’s entire U.S.-Canadian network came under the control of a new company.

The Central Maine & Quebec Railway (CMQR) now operates the 510 miles of track running through portions of Maine, Vermont, Quebec and New Brunswick that MMA had controlled since it was formed in January 2003. Earlier this year, Fortress Investment Group L.L.C. subsidiary Rail Acquisition Holdings L.L.C. acquired MMA’s U.S. and Canadian networks through a bankruptcy proceeding, and formed CMQR to operate the lines.

CMQR launched U.S. operations in mid-May and Canadian operations on July 1 after receiving necessary approvals from federal regulators in both nations. 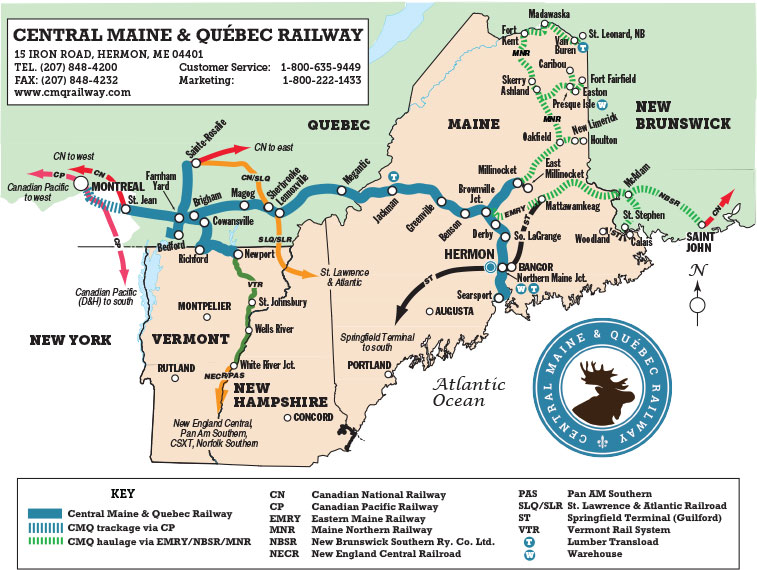 Source: Central Maine & Quebec Railway
To get the word out about the newly formed regional, CMQR executives continue to meet with government officials, customers and representatives from other railroads to let them know there’s a new operator that’s taking a new approach to conducting business, says CMQR Chief Executive Officer John Giles. In the short term, that means increasing capital expenditures on infrastructure improvements, upgrading locomotives, boosting sales and marketing efforts, and re-emphasizing the need for workers to follow safety procedures, he says.

MMA was “a laggard” in safety performance, so CMQR needs to do more to ensure its 85 U.S. and Canadian employees are complying with all policies and regulations, says Giles.

“We will have more supervision than there was in the past. We want to make sure [workers] know safety is a condition of their employment,” he says.

Giles characterizes MMA as a poor operating ratio performer, as well. While serving as president and CEO of RailAmerica Inc. for Fortress well before the short-line holding company was sold to Genesee & Wyoming Inc. in 2012, he and his management team developed a good track record with improving safety and lowering the operating ratio via strict policies, cost controls and a strong sales/marketing emphasis, says Giles. Three former RailAmerica executives are on board to help CMQR accomplish the same objectives: Chief Operating Officer Ryan Ratledge, Chief Financial Officer Sachi Mishra and Chief Commercial Officer Jay Lander.

“We want to grow the business, and we’re working hard to do that,” he says.

The railroad’s major commodities will continue to be lumber, wood products and propane.

“In Maine, they use propane for heating and there are no pipelines there,” says Giles.

Crude oil also could be a revenue-contributing commodity — as it as for MMA — but that’s perhaps a ways off. CMQR has voluntarily decided it won’t move crude through Lac-Mégantic until at least 2016, says Giles.

“And it’s not because of the goodness of my heart. We need two [construction] seasons to get the railroad up to snuff and be able to handle unit trains, and to get people trained,” he says. “Plus, the people of Lac-Mégantic have had a rough road — it just happened a year ago.”

CMQR is working with the governments of Canada, Quebec and Lac-Mégantic on a plan to build a loop track around the town that would enable the railroad to stop using a line running through the community.

“But we don’t know the economics of it. How do we come up with $100 million?” asks Giles, citing the mid-range of the project’s $50 million to $150 million cost estimate.

CMQR already expects to spend $6 million to $7 million through the remainder of 2014 to improve existing infrastructure.

“We can’t spend more than that sensibly. We got off to such a late start,” says Giles.

The railroad’s previous owners didn’t invest heavily enough in infrastructure for a number of years and the network’s in bad shape, he says. To that end, CMQR has ordered 25,000 ties to install by next winter, mostly in Canada, and ordered a rail train for trackwork projects.

“We want to reduce slow orders,” says Giles, adding that train speed limits are 10 mph in some areas.

The locomotive fleet was in bad straits, too — as in too many old units, he says. So, CMQR leased nine SD40-2s and seven GP-20s, which are more fuel efficient, Giles adds. The railroad also owns six B-23s.

With a more modernized locomotive fleet, bolstered track, and larger sales and marketing force, CMQR stands a better chance of registering business growth in the near term, Giles believes.

“We want to be aggressive, and get out there and sell,” he says.