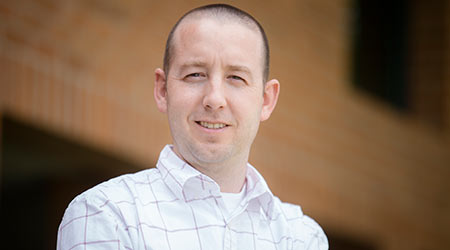 Michael Keller learned from his dad what it takes to be a great railroader. Richard Keller worked in the industry for 40 years, much of it for the Milwaukee Road and Montana Rail Link. He retired in 2011.

"When I was young, I observed the railroad industry by overhearing what he was doing," Michael Keller says. "Or, he would explain things when we drove by railroad tracks."

When it was time for college, after a year at the University of Montana, Keller enrolled in engineering school at Montana State University, where he earned bachelor's and master's degrees. After completing his studies, he began his career at the Washington State Department of Transportation, where he worked on highway bridge design and inspection. When Keller and his wife decided to move back home to Montana, Keller applied for a job at HDR Inc. in Missoula, where he was invited to join the firm's rail group after a couple of years at the firm.

"Railroading has always had a nostalgic feel for me, since I was watching my father go through it," says Keller. "But actually doing the work myself, I've found it's an extremely fast-paced environment and very exciting. Projects go from start to finish very quickly and it makes for an interesting day."

Keller has been the engineer of record for more than 140 railroad bridges, performed load ratings on more than 200 and inspected more than 30 in the United States and Canada, according to Scott Goehri, who nominated Keller for the Rising Stars Award and is director of professional services for HDR's transportation business group.

"He actively seeks solutions to the many challenges of reconstructing and maintaining bridges for railroads," wrote Goehri, adding that Keller will go the extra mile to get a job done.

For example, when a train derailed off a bridge one Saturday morning in Kansas City, Mo., Keller rallied a team by that afternoon to start replacing 98 feet of bridge length that had been wiped out during the incident. The bridge was back in service just a week later. Keller's team efforts resulted in an HDR Crystal Pathfinder Award, the top peer-nominated internal award at the firm, according to Goehri.

When he's not at work, Keller enjoys coaching his three children's soccer and basketball teams. He also participates in food drives, Toys for Tots, Big Brothers and Sisters' Bowl for Kids' Sake, and the United Way. Keller and his wife Sara met in high school while performing in the marching band: They both played clarinet.

His philosophy boils down to, "Have fun and live without regret," Keller says.

"Situations can be difficult at times and people will make mistakes. But I try to make decisions, both personally and professionally, that I think are the best given what is known in the present situation," he says. "Knowing that I’ve made prior decisions to the best of my ability helps me look back without regret."