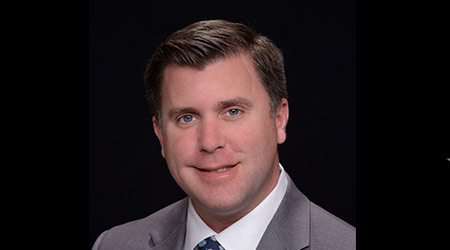 Matt Campbell has been interested in railroading since childhood. His father — who worked as a conductor for more than 40 years at CSX and its precursor the Seaboard Coast Line Railroad — used to bring him along to rail yards, where he got a glimpse of what it was like to work on the railroad.

In 2000, Campbell joined CSX as a conductor. He was 19. In 2003, he was elected to serve as the local alternative legislative representative for the United Transportation Union, which later merged with the Sheet Metal Workers International Association to form the International Association of Sheet Metal, Air, Rail and Transportation Workers (SMART).

A year later, he was elected as legislative representative. Campbell was elected to his current role as SMART Transportation Division's (TD) Georgia state legislative director in 2012.

"Now, I work to preserve jobs for the folks doing them now, and for the future generation of railroaders," Campbell says.

To that end, Campbell lobbies at the Georgia State Capitol on behalf of rail workers. He also leads various safety efforts, such as working with the National Transportation Safety Board during investigations of fatal train accidents. Campbell also has served as chairman of SMART TD's national rail safety task force.

In addition, he's a member of the Georgia Railroad Association, where he lobbied for preservation of the federal 45G short-line tax credit.

From early on in his career, Campbell's peers viewed him as a leader, according to SMART TD Alternate National Legislative Director Greg Hynes, who nominated Campbell as a Rising Star.

"Through his extensive involvement in various railroad organizations and his union … Matt has shown his deep commitment to the railroad industry and established himself as an accomplished and courageous leader of his generation of railroad workers," wrote Hynes in the nomination.

"Matt is a top member of our team and a young man who has a very bright future," Risch said.

Outside of his union duties, Campbell is pursuing his bachelor's degree in political science from Kennesaw State University. He also spends time with his three children and his wife, Chrissy.

Campbell hopes to continue working on the labor side of the industry.

"My ideal place to be would be doing what I'm doing now: promoting the rail industry and promoting safety," he says. "I'm making my impact a little bit at a time here in Georgia."