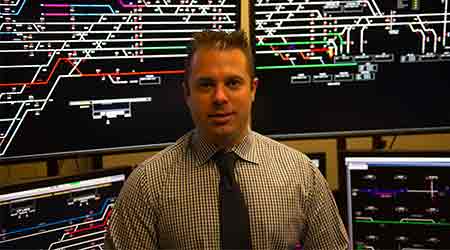 Greg Godfrey is responsible for 510 trains moving in and out of Amtrak's Chicago Union Station each day.

Those trains operate on Amtrak Midwest routes, including Amtrak’s 110 MPH service in Michigan, and six Metra lines; and include Class Is that operate on portions of Amtrak lines.

It's a high volume of traffic to manage, and Godfrey — assistant superintendent of train movement — credits his staff of 30 for their efforts to keep the trains moving safely and on time. Through Union Station, Godfrey's team operated 3,443,621 million switches and signals in FY2015, and operated the south branch movable bridge 4,260 times between train traffic.

"We are like the prehistoric version of air traffic controllers. We're doing all the traffic control," says Godfrey, who has spent his entire career at Amtrak.

That's a lot of railroading for a guy who didn't set out to be in the rail business. Godfrey was an English major at Rutgers University, where he later returned to earn a master's degree in city and regional planning. While working on his master's, he was influenced by Martin Robins, who is the founding director of Rutgers' Alan M. Voorhees Transportation Center. Robins spent more than 25 years designing New Jersey's mass transportation system and helped create New Jersey Transit.

Robins helped Godfrey land an internship at Amtrak in 2002. The next year, Amtrak brought him on board full time as a tower man overseeing traffic between Newark, N.J., and Newark Liberty International Airport. Godfrey then moved through the ranks serving Amtrak's Northeast Corridor, where he last served as assistant chief. In 2011, Godfrey moved to the other side of the country to direct Amtrak's dispatch office in San Jose, Calif., where he developed a new dispatch manual that used Google data to dramatically reduce the time it took emergency crews to respond to trespasser incidents.

For the past four years, he's been in Chicago, where his achievements include helping to implement a fully integrated positive train control (PTC) system — controlled from the dispatch station — on 97 miles of the 110 mph Michigan Line. The PTC system enables dispatchers to record speed restriction data in a computer; that data is then received and implemented in the locomotive cab within seconds, wrote Mike Yates, an Amtrak trainmaster who nominated Godfrey for the Rising Stars award.

Godfrey also is the "driving force" behind an initiative to automate processes and procedures so that dispatchers can operate safely and more efficiently in their jobs, Yates noted.

It's in that role that Godfrey believes he's made the biggest difference so far.

"We take each process that a dispatcher goes through and analyze it to see if we can regularly and safely automate it," Godfrey says. "I've got a great technical team and we've made huge strides."

His philosophy boils down to being as honest and open with people as possible.

"This is an unforgiving business," says Godfrey. "To an extent, you have to remain humble. Explain your limitations. Everyone else will appreciate that."