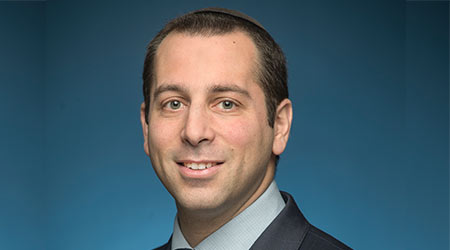 The incident — which was one of the worst in the commuter railroad’s history — resulted in four deaths and 61 injuries.

“It was a morning that I think changed my perspective and my view on my role in the industry,” says Bernstein, 34, who serves as Metro-North’s director of finance, administration and crew management.

For him, the derailment underscored the need to make the railroad safer — something he’s been working on since. In the immediate aftermath, he implemented new speed compliance solutions and co-led a team that worked to improve Metro-North’s safety culture. He also led the railroad's response efforts following the Federal Railroad Administration’s subsequent investigation.

Along the way, he quickly developed a solid rapport and working relationship with the railroad's field operations team, wrote Metro-North Chief Transportation Officer Kevin O'Connor in his nomination of Bernstein as a Rising Star.

"[Bernstein] has been able to very quickly rise above the learning curve and understand the multiple functions required to run the railroad and how they are intertwined — all in the name of ensuring we have the safest and most efficient railroad possible," O'Connor wrote.

In addition, Bernstein had a lead role in Metro-North's move to mobile ticketing: He built a business case for the technology and supported the procurement process to select a vendor.

His current duties include overseeing a nearly $400 million annual budget and supervising crews and dispatching.

He joined Metro-North in 2011 after completing a stint as a manager with the MTA, the commuter railroad’s parent agency. Prior to that, he worked as a summer associate at Globe Specialty Metals and a civil engineer for Parsons Brinckerhoff.

He earned his bachelor's and master's degrees in civil engineering from The Cooper Union for the Advancement of Science and Art and later completed an MBA degree at Harvard Business School.

Outside of work, Bernstein volunteers as an emergency medical technician for a local ambulance corps. He also spends time with his wife, Sara, as well as his two daughters, Daniella and Lea.

In 2010, he founded the New York City chapter of the Young Professionals in Transportation, a group that aims to provide networking and fellowship.

When asked about career advice for future railroaders, Bernstein highlighted the importance of finding good mentors.

"Do what you love, but surround yourself with good people," he advises.