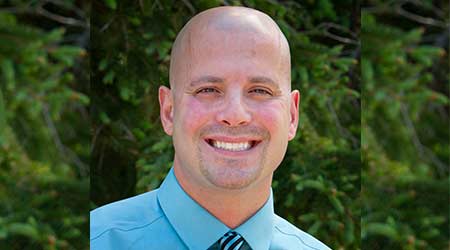 Mike Logan was a short-order cook at a Crivitz, Wis., restaurant when he decided to take a shot at getting a railroad job.

Logan had been working at the restaurant since he graduated from high school. What he really wanted was a job that offered better wages, employee benefits and a chance at a career.

Crivitz also is the location of an Escanaba & Lake Superior Railroad (E&LS) repair-in-place (RIP) rail-car facility. Many of the railroaders who worked there would stop in for lunch at the restaurant where Logan worked.

“I'd see them three or four days a week and when they talked about their job, I found it very interesting," says Logan.

One day at lunch, a railroader told Logan about an opening for a general laborer at E&LS' RIP facility. Logan says he didn't have the "exact experience" the job required, but he was confident he could learn how to do it. He applied, and he was hired.

That was 19 years ago, and Logan hasn't looked back. He's been promoted numerous times, from foreman of the RIP track to manager of the railroad's car repair facility. Today, Logan is responsible for all the mechanical aspects of the railroad, as well as two car shops and the blast-and-paint facilities.

The business has grown exponentially since Logan came on board in 1997. When he took over the repair shop in 2006, the shop had one customer and 12 employees. Today, the car repair facilities employ more than 90 workers and serve 48 customers, which include private-car owners and two Class Is.

Logan's responsibilities include recruiting new employees and expanding the railroad's customer base. He relies on the old adage "the customer is always right" to keep E&LS customers happy.

"I believe in treating each customer — whether it's a one-car owner or a 200-car owner — with respect and excellent service," says Logan.

He also believes in keeping an open mind when it comes to change, however sudden.

"All you can do is keep looking forward and stay positive, no matter what's thrown at you," he says. "Obviously there's change in our industry and you have to be able to accept it and move on."

His advice to new railroading recruits: "Work as hard today as you did your first day on the job, and always believe in yourself. And, respect everyone you meet in life. You never know what knowledge will be given to you from the most unexpected source."

When he's home on weekends, Logan spends time on his favorite hobby.

"Ironically, it's cooking," he says. "I love to cook for my family and friends. I also enjoy just watching the world through the eyes of my two children (ages 8 and 6) as they're growing up."