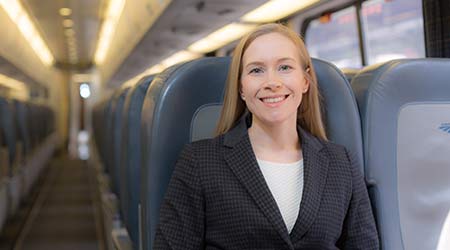 An urban planner by training, Gretchen Kostura has always been curious about infrastructure generally, but it was a job at the Port Authority of New York and New Jersey (PANYNJ) that piqued her interest in rail. One aspect of the position involved working on transit-oriented development projects for the Port Authority Trans Hudson (PATH) passenger-rail line, which connects New Jersey to midtown Manhattan.

"I never realized how nuanced rail was," she says. "It's more than just the physical track; it's the whole passenger experience."

Kostura entered PANYNJ's fellowship program in July 2007, shortly after completing her master's degree in city and regional planning at Rutgers University. In January 2009, PANYNJ offered her a job as a project manager in its real estate department — a position she held for a little more than four years.

When her husband took a job in Washington, D.C., Kostura began looking for employment there. A posting for a program manager to help oversee Amtrak's D.C. Union Station renovation plan caught her eye; she applied and was hired in 2013. The national intercity passenger railroad now is moving ahead with the multibillion-dollar project to increase capacity at the station, which is Amtrak's second largest in the country.

"Kostura is a 'Rising Star' in the rail industry whose impact will be seen for years to come as her leadership on this marquee project will improve state of good repair, increase rail capacity, improve the passenger experience and integrate new air rights development at Washington Union Station," wrote Ramona Schmitt, director of management services for Amtrak's infrastructure and investment development department, in her nomination of Kostura for Rising Stars recognition.

Projects Kostura is overseeing include the replacement of frequency converters for a substation, reactivation of a track for revenue service and reconstruction of platforms. Currently, both passengers and maintenance crews move through one entrance, which creates a daily foot traffic jam, Kostura says. The redevelopment project calls for new passenger concourses below existing tracks, multiple entrance points and wider platforms, along with new passenger amenities and retail space.

Kostura is particularly drawn to the economic and community development potential of passenger-rail stations.

"Stations are becoming a really big part of the rail world," she says. "The work we're doing in Washington is really creating a new neighborhood that's integrated with rail."