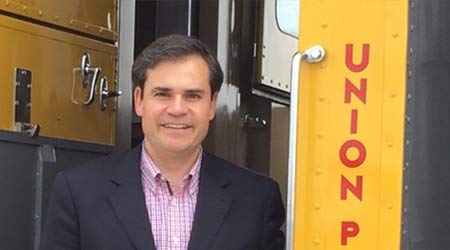 From an early age, Bernardo Ayala knew he wanted to work for a railroad. Growing up in Mexico City, he was drawn to the freight trains that passed through town.

"I didn't live very far from where the trains went by, and I always asked myself: Where are they coming from? Where are they going? What are they handling?" he says. "I was always intrigued."

So, after earning his law degree from Mexico's Universidad Iberoamericana, Ayala in 1996 landed a job as an assistant apprentice hostler for the former Ferrocarriles Nacionales de Mexico (FNM). The position involved servicing, cleaning and fueling locomotives.

In 1997, Grupo Mexico, Ingenieros Civiles Asociados and Union Pacific Railroad won a piece of FNM — the Pacific-North Railway — and named it Ferrocarril Mexicano S.A. de C.V. (Ferromex). Ayala went on to work in Ferromex's law department from June 1998 to June 2003. He left the railroad to pursue a master's degree in law from Northwestern University School of Law and a certificate in business administration from the Kellogg School of Management.

In 2004, Ayala entered the manager trainee program at UP, which owns 26 percent of Ferromex. During his time in the program, he worked as a manager of intermodal operations and, later, as manager of terminal operations. He returned to Ferromex in March 2007 as assistant vice president of government affairs.

In December 2008, UP appointed Ayala to his current position of VP, Mexico markets. He oversees the Class I's Mexico business and operations, including sales and customer support throughout the United States and Mexico.

Among his achievements: Ayala, 39, developed UP's Mexico chassis legal framework, which was required for implementation of the railroad's intermodal strategy in Mexico. The framework enabled UP to support its own intermodal operations and move away from a third-party model, according to UP Executive Vice President and Chief Marketing Officer Eric Butler, who nominated Ayala for Rising Stars recognition.

Ayala also played a key role in launching the Eagle Pass Premium Service, which transports goods from Silao, Mexico, to Chicago and Memphis, Tenn. UP partners with Ferromex to provide the service.

"Bernardo is a proven leader who relies on his operating and legal backgrounds to dissect an issue and develop competitive solutions, as well as reach out to subject matter experts and create result-driven teams," Butler wrote in his nomination. "He understands the 360-degree view of how to make his team successful and enhance Union Pacific's role in the nation's supply chain."

And indeed, Ayala is doing what he can to share his knowledge of the Mexican markets with businesses in the United States.

"At times there is this notion that conducting business in Mexico may be difficult, or maybe people aren't very familiar with how robust the market is and how many opportunities are there," he says. "What I focus on is integrating the UP network with the Mexican networks."