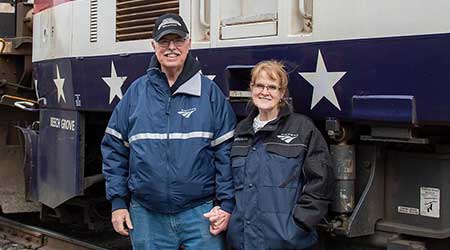 Rail industry representatives are reacting to the news of former Amtrak leader Joseph Boardman's death, which the railroad announced yesterday.

Boardman, 70, died this week after suffering a stroke while on vacation with his wife and family in Florida, the Rome Sentinel reported. He led Amtrak from 2008 until 2016, when he retired. He also served as administrator of the Federal Railroad Administration (FRA) from 2005 to 2008 during President George W. Bush's administration.

Prior to serving Amtrak and the federal government, Boardman was commissioner of the New York State Department of Transportation.

Other railroad industry leaders and organizations offered statements, as well. Following are some of their comments.

"During his more than 40 years in the industry, Joe Boardman's work was more than just improving transportation; it was grounded in a mission to bring people together." — Association of American Railroads President and CEO Ian Jefferies

"He was a personal friend, a highly regarded public servant and well respected among the FRA staff. He was FRA's 11th administrator before becoming Amtrak's CEO. We at FRA and the Department of Transportation extend our deepest sympathies to Joe’s family." — FRA Administrator Ronald Batory

"Joe was a tireless industry advocate for rail safety and efficiency, whether he was leading Amtrak, the New York DOT, or the Federal Railroad Administration. He cared deeply about serving the American public, ensuring rail access throughout the nation's heartland. He was that rare individual who cared more about finding a solution to a problem than taking credit for a solution and our industry benefitted greatly from that way of doing business." — American Short Line and Regional Railroad Association President Chuck Baker

"He was an outstanding leader at the New York Department of Transportation, the Federal Railroad Administration and Amtrak, and his legacy of public service and improving rail transportation is a model for all of us." — American Public Transportation Association President and CEO Paul Skoutelas

"Joe Boardman's legacy as Amtrak CEO is significant for sure but it includes the fact that he inherited badly ruptured labor-management relations and with personal ongoing involvement rebuilt trust with the unions and employees and solved problems." — Edward Wytkind, former president of Transportation Trades Department, AFL-CIO.

"He was a fine railroader." — Norfolk Southern Corp.