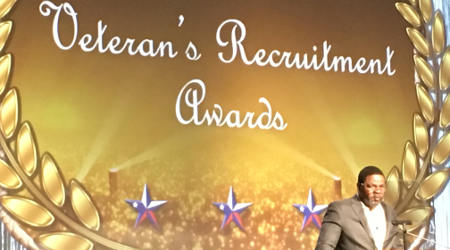 The association honored two short lines and two rail industry suppliers with the Richard F. Timmons Award, which recognizes efforts to recruit and support military veterans. The award is named for the former U.S. Army lieutenant general who served as ASLRRA's president from 2002 to 2014.

The ASLRRA also recognized GE's Gary Griswell with the Thomas L. Schlosser Distinguished Service Award, which is named for the association's former chairman and long-time contributor who died in 2011. The award recognizes an individual's contributions to the ASLRRA, including service on committees and the board, or the implementation of significant new programs.

GE Transportation's customer success manager-rail, Griswell has served on the association's board and technology committee, and chaired the annual convention in 2015. He will again chair the annual conference in 2018.

Griswell has always served with honesty and integrity, and has earned respect from his customers because he has always gone the extra mile, said ASLRRA Chair Judy Petry said during the award presentation.

"He is dedicated to his customers and to the industry as a whole," she said.

The association honored North Shore for handling high and wide dimensional loads for a power plant in Pennsylvania that went "over and above" the short line's daily operations, ASLRRA officials said during the award presentation. The railroad handled 60 high and wide shipments in 2016 — more than the total of such shipments during North Shore's first 31 years of operation.

The ASLRRA bestowed the award to Springfield Terminal Railway for providing a viable truck-competitive rail option for Maine bottled water company Poland Spring, which was using 600 trucks per day. The effort led to the railroad's first intermodal move to central Maine in a long time and a 67 percent carload increase in a year, ASLRRA officials said during the award presentation. In addition, the traffic expanded intermodal business for Springfield Terminal's owner, Pan Am Railways.

Meanwhile, Wisconsin & Southern won the award for working with a customer in Oshkosh, Wis., to successfully load and ship military equipment to the Port of Baltimore. The moves involve Norfolk Southern Railway and TTX Co. Wisconsin & Southern was able to develop new business with an existing customer, ASLRRA officials said during the award presentation.