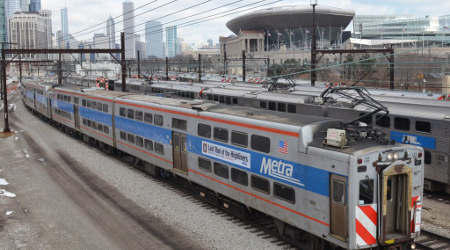 The Chicago commuter railroad will use the system to verify that train crews are following safety laws and operating rules. The system also will be used to gather information in accident investigations and document any criminal acts, Metra officials said in a press release.

"These cameras will give us another tool to ensure we are operating as safely as possible," said Metra Executive Director and Chief Executive Officer Don Orseno.

In 2015, Congress ordered the U.S. Department of Transportation to draft rules requiring passenger railroads to install inward- and outward-facing cameras in all locomotives and other operating compartments such as cab cars. Those rules are expected from the Federal Railroad Administration by 2017's end, according to Metra.

The National Transportation Safety Board (NTSB) also has advocated for the use of cameras inside locomotive cabs as an aid in accident investigations. The cameras also can be used to help railroad managers prevent accidents by identifying safety issues before they lead to injuries or deaths, according to the NTSB.

Meanwhile, Metra's board also approved contracts to replace or repair several bridges along the Union Pacific North Line on the North Side of Chicago.

The railroad awarded a $17.2 million contract to Judlau Contracting Inc. to replace bridges that carry inbound UP North Line tracks over 11 streets from Grace Street to Balmoral Avenue.

In addition, Metra awarded a $15.5 million contract to Kenny Construction Co. to rehabilitate the UP North Line bridges over Webster Avenue and the North Branch of the Chicago River.

Finally, the railroad also approved a $15.5 million contract with IHC Construction Cos. to build the new inbound half of the Ravenswood Station, which is the busiest station on the UP North Line outside of downtown.

The projects are part of Metra's 2017 construction program, which includes $216 million in infrastructure improvements.