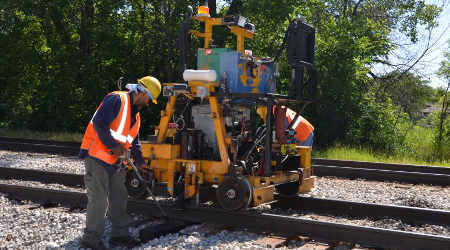 Metra and its railroad partners this year will complete $216 million worth of infrastructure investments, the commuter railroad announced yesterday.

The 2017 construction program includes major bridge replacement projects on the UP North and Milwaukee West lines, plans to build new track segments on the UP West Line and a number of smaller infrastructure projects distributed across Metra's 11 lines.

In total, the railroad plans to replace about 57,000 ties as part of its track improvement projects, Metra officials said in a press release.

The agency will build 8 miles of third track along the UP West Line's two remaining double-track segments. Constructing the new track is expected to cost more than $100 million.

"We plan to take full advantage of the construction season by making improvements where we can with our limited funding," said Metra Executive Director and Chief Executive Officer Don Orseno. "Our goal is to be as efficient as possible with the resources we have and limit the impact of construction activity on our customers."

To learn more about Metra's infrastructure plans for the year — as well as the maintenance-of-way programs set by more than 60 freight and passenger railroads — check out Progressive Railroading's 2017 MOW Spending Report, which is published in the April issue.