Brightline steps up safety initiatives in response to rail-crossing deaths 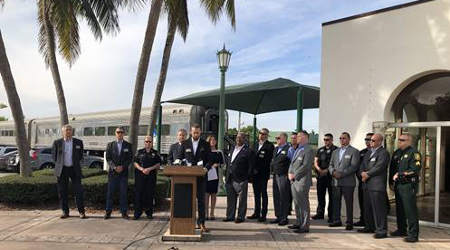 Two deaths occurred after Brightline trains struck individuals on the railroad's route during the service's first week of operation. Some political leaders have since called for federal transportation officials to investigate the deaths and Brightline's safety efforts.

On Jan. 17, a Brightline train struck and killed a bicyclist who pedaled around gates near the Florida East Coast Railway crossing at Ocean Avenue in Boynton Beach. Five days earlier at a crossing about a mile away from that fatality, a woman was struck and killed after she tried to "beat the train" by walking around downed gates and flashing signals at a crossing, according to local news reports.

Brightline will use electronic signs and position employees at crossings to urge the public to obey warning signs, lights and gates at grade crossings. Additionally, Brightline will continue to partner with Tri-Rail, the Palm Beach Transportation Planning Agency, the Broward Metropolitan Planning Agency, local law enforcement and cities and counties along the corridor.

"For the past year, we have been engaged in the communities along the corridor, and we will continue these outreach efforts," said Goddard in a press release. "We implore the public to be patient and not circumvent the safety devices in place to keep you safe. Your life is worth more than waiting a few extra seconds for a train to pass."

As part of an expanded outreach plan that began in early 2017, Brightline will continue working with Operation Lifesaver Inc. to create an additional public-service announcement campaign, including materials in English, Spanish and Creole; installing additional signage that warns motorists and pedestrians to stay off the tracks at grade crossings along the corridor; activating safety ambassadors; and attending community events and passing out rail safety information along the corridor.

Meanwhile, Sens. Marco Rubio (R-Fla.) and Bill Nelson (D-Fla.) called on federal transportation officials to step in to evaluate whether proper safety measures are in place on Brightline's route.

"In Florida, we have seen the challenges of addressing grade crossing safety, where according to 2016 data the state is in the top 10 for fatalities and collisions. Tragically, this trend is continuing with two recent fatalities in Boynton Beach involving the Brightline high-speed train," Nelson wrote in a letter to U.S. Transportation Secretary Elaine Chao.

U.S. Rep. Brian Mast (R-Fla.) called for the suspension of all Brightline train routes until the House Transportation and Infrastructure Committee can hold an oversight hearing on high-speed rail safety in Florida and the U.S. Department of Transportation conducts a thorough safety review.