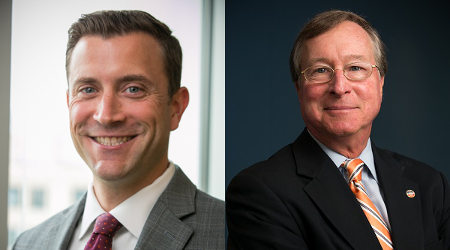 The Association of American Railroads (AAR) has announced its next president and chief executive officer will be Ian Jefferies, who currently serves as the organization's senior vice president of government affairs.

Jefferies will assume his new duties Jan. 1, following the retirement of current AAR President and CEO Edward Hamberger. Jefferies will continue to lead the organization's legislative efforts through the end of the year and coordinate with Hamberger to ensure a smooth transition, AAR officials said in a press release.

"For years, we have known that Ian understands both the policy and priorities of the rail industry, and he has been a proven advocate for our issues," said AAR Chairman Jim Squires, who is Norfolk Southern Corp.'s chairman, president and CEO. "Ian will extend a legacy of vision, leadership and energy to write an exciting new chapter for the AAR while ensuring that it remains a clear and trusted voice in Washington."

The freight-rail industry is heading in the right direction to meet its challenges, said Jefferies.

"I am honored to work for a bedrock industry that delivers every day for the economy, and I appreciate the confidence placed in me to guide the AAR as we work to build an even stronger future for rail," he said.

Leading the industry's advocacy efforts in Washington, Jefferies has worked on a bipartisan basis to build consensus and broad coalitions in support of railroads' policy priorities before Congress and the administration, AAR officials said.

Prior to joining the AAR in 2013, Jefferies worked for more than a decade in government, including as a senior policy adviser to the chairman of the U.S. Senate Committee on Commerce, Science and Transportation. He also worked for the U.S. Department of Transportation, Office of the Inspector General and the U.S. Government Accountability Office before working on Capitol Hill.

In November, Progressive Railroading and RailTrends® will recognize Hamberger as the 2018 recipient of the Railroad Innovator Award, which recognizes an individual's outstanding achievement in the rail industry.

As AAR's CEO since 1998, Hamberger has helped the freight-rail industry navigate periods of economic change and regulatory uncertainty. Notably, he's consistently advocated for a balanced regulatory environment, one that has enabled railroads to post continued record private investment in infrastructure.

Hamberger also fostered innovation on the government relations front, leading the way as the industry entered the public-private partnership realm. And he continues to strive to clear a path to help railroads to develop and deploy new safety technologies.

Hamberger will receive the award at RailTrends 2018 conference, which will be held Nov. 29-28 at the New York Marriott Marquis in New York City.