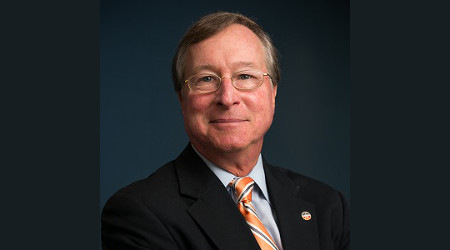 Progressive Railroading and RailTrends® have named Association of American Railroads President and Chief Executive Officer Ed Hamberger the 2018 recipient of the Railroad Innovator Award, which recognizes an individual's outstanding achievement in the rail industry.

Hamberger, who's served as AAR's CEO since 1998, has helped the freight-rail industry navigate periods of economic change and regulatory uncertainty. Notably, he's consistently (and nimbly) advocated for a balanced regulatory environment, one that has enabled railroads to post continued record private investment in infrastructure. Hamberger also fostered innovation on the government relations front, leading the way as the industry entered the public-private partnership realm. And he continues to strive to clear a path to help railroads to develop and deploy new safety technologies.

Hamberger began his career in transportation as general counsel of the National Transportation Policy Study Commission. He subsequently served as assistant secretary for governmental affairs at the U.S. Department of Transportation and managing partner at Baker, Donelson, Bearman & Caldwell in Washington, D.C.

The longest-tenured head of AAR, Hamberger announced on May 16 that he'll retire early next year.

"Ed has helped the AAR through the flowering of the 'railroad renaissance' with grit when it was needed to fend off ill-conceived regulatory threats, and he did so with grace, always," says Tony Hatch, an independent transportation analyst and program consultant for the annual RailTrends conference. "Under his tenure rails moved through enormous challenges, from the fall of coal to the rise of intermodal, and the PTC mandate. ... Under his beneficent leadership, the rails have done so well and expanded to be a truly continental network. Like Victoria to 19th century England, we may look back on this as rail's 'Edwardian Age.'"

Hamberger will receive the award during RailTrends 2018, which will be held Nov. 29-30 at the New York Marriott Marquis in New York City. For more information, log onto RailTrends.com.