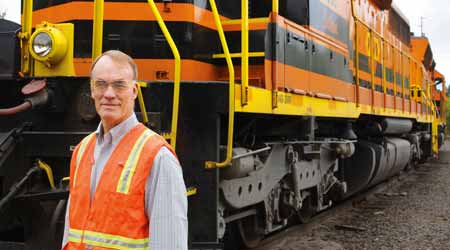 In the late 1980s, Fuller was a founding member of the Regional Railroads of America (RRA), a group of a dozen short-line railroaders that sought to change New Deal-era laws that treated railroads differently than all industries. RRA gradually grew in size and prominence as a short-line lobbying organization, according to an ASLRRA press release.

Fuller became chief executive officer, president and chairman of the original Genesee and Wyoming Railroad in 1977, when he purchased a controlling interest. Fuller served as G&W's CEO for 30 years and chairman for 40 years. Under his tenure, G&W grew from a 14-mile short line in upstate New York with 1977 revenue of $4.4 million to a portfolio of 122 freight railroads worldwide with 2016 revenue of $2 billion.

The award is named after the late Thomas Schlosser, a former ASLRRA chairman. Schlosser — who served stints as president and CEO of the Fort Worth & Western Railroad, president and COO of Park Sierra Rail Group, and CEO of Global Rail Systems — died in October 2011.

Also at yesterday's Connections Convention, the League of Railway Women (LRW) inducted ALSRRA Vice President of Member Engagement and Sales Kathy Keeney into the LRW Hall of Fame. This marks the first year the association has bestowed the Hall of Fame award. 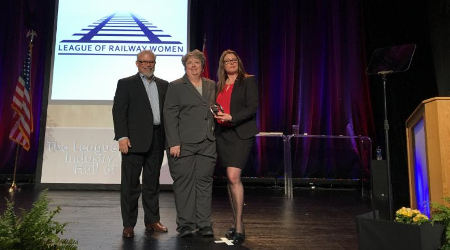 "Kathy's tenure with the League of Railway Women (formerly League of Railway Industry Women) has been instrumental to the success of our organization and to the careers of many. We are pleased to acknowledge and thank Kathy for her leadership, vision and inspiration that has created a legacy for women in the railroad industry," said LRW President Tanis Peterson in a press release.

A seasoned transportation executive with expertise in publishing, sales, marketing and finance, Keeney joined ASLRRA in 2015. Prior to that, she was rail publisher for the JOC Group Inc., UBM Global Trade and Commonwealth Business Media, and served as an executive and writer for other rail industry trade publications. She has been involved with LRW since joining in 1998, a year after the organization was founded. Keeney has held a number of board positions, including scholarship director, vice president and president.

ASLRRA's four-day convention — which wrapped up yesterday — featured 36 educational sessions and an exhibit hall hosting 240 booths. This year's registration of more than 1,800 people was a near record, surpassed only by the association's centennial celebration in 2013, association officials said.

On Monday, ASLRRA honored two individuals — Jeremy Kramer and Mitch Harris — for their career commitments to "safety compliance and culture."