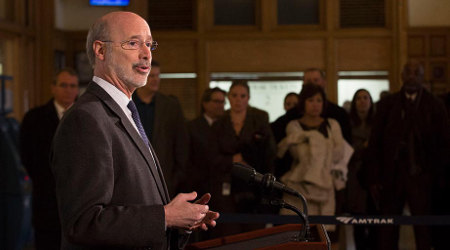 PennDOT will review several past studies on the Keystone West Corridor, and gather information about the existing right of way, as well as current and projected freight-rail activity on the line. The department also will develop estimated costs of the proposed project, according to a press release issued by Wolf's office.

In addition, the department will produce three potential service plans, a travel-demand marketing assessment and ridership estimates. The work will include outreach to Norfolk Southern Railway — which owns the corridor between Harrisburg and Pittsburgh — and Amtrak, which operates the cross-state Pennsylvanian, a once-daily train in each direction between New York City, Philadelphia, Harrisburg and Pittsburgh.

"I know the appetite for such service remains strong in western Pennsylvania, and I have asked PennDOT to check once again about whether such a step is possible," Wolf said. "I want to exhaust every angle possible to serve the needs of this region."

Pennsylvania has commissioned several previous studies on the feasibility of adding Amtrak service between Harrisburg and Pittsburgh, but none has led to the start of service, the Altoona Mirror reported.