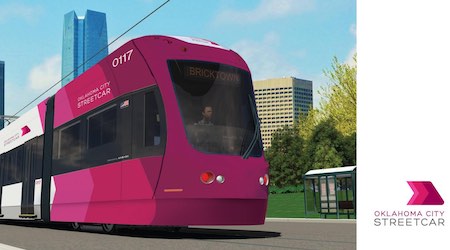 The Oklahoma City Council last week selected Herzog/Stacy and Witbeck Inc. to install rail for a planned streetcar system in the city.

The companies' bid came in at $50 million, which was about $7 million lower than the projected construction budget, according to a press release on the Oklahoma City government website.

Construction is slated to begin in January 2017. The 4.6-mile, $131 million route will include 22 stops and link downtown Oklahoma City to the Bricktown district and other areas in the city's urban core.

In March, the city's council approved a $24.9 million contract to buy five streetcars from Brookville Equipment Corp., which was selected to build streetcar units in Milwaukee, Detroit and Dallas.