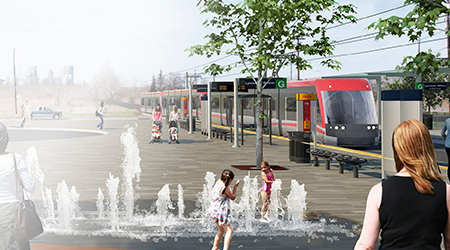 Canadian Prime Minister Justin Trudeau yesterday confirmed that the federal government will provide up to CA$1.53 billion toward the Green Line light-rail project in Calgary, Alberta.

The sum marks the Canadian government's largest contribution for an infrastructure project in Alberta, according to a press release issued by Trudeau's office.

Federal leaders who were in office before Trudeau had promised the funds before the 2015 elections, the Calgary Herald reported.

The first stage of the Green Line project includes the construction of 12.4 miles of track, 14 stations 70 low-floor light-rail vehicles, and a vehicle maintenance and storage facility.

Construction of the initial phase is expected to start in spring 2020 and wrap up by late 2026. The line will connect the Calgary's north and southeast communities to the downtown core.

In July 2017, Alberta officials announced the province will provide CA$1.53 billion toward the project's estimated cost of CA$4.65 billion. The federal government and Calgary's municipal government are paying for the remainder.