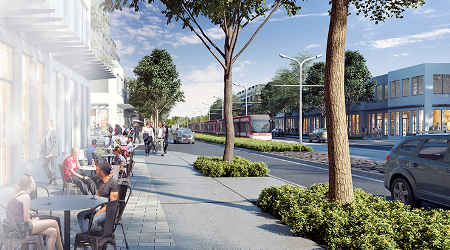 The province of Alberta will provide CA$1.53 billion to support the first stage of Calgary's Green Line light-rail project.

The funds will come from Alberta's "Climate Leadership Plan," which includes a carbon levy. The province's contribution will cover about a third of the $4.65 billion project; Calgary's municipal government and the Canadian federal government will fund the remainder.

The Green Line's first phase will be 12.4 miles long and include 14 stations, as well as a light-rail vehicle maintenance facility. The project will help connect Calgary's downtown core to communities in the southeast.

In addition, when the initial phase is completed in 2026, the line will help reduce greenhouse gas emissions by 30,000 metric tons of carbon dioxide each year, according to a press release from the Alberta government. The entire Green Line will be 29 miles long.

"As the largest public infrastructure project in our history, the Green Line will transform our city," said Calgary Mayor Naheed Nenshi. "This is an investment in quality of life for all Calgarians — an investment that will also create jobs and encourage economic and community development."