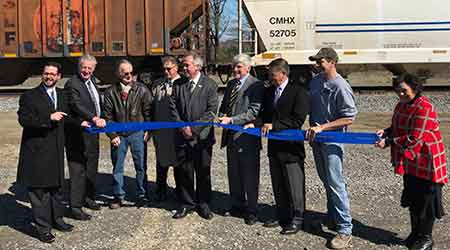 The Wyoming Transfer Station will serve companies interested in shipping by rail. It represents the final stage of Wyoming County's rail initiative, which began in 2008 and represents a nearly $1 million investment from the New York State Department of Transportation's (NYSDOT) multimodal program, the Wyoming County IDA, Wyoming County and private site work provided by Marquart Cos., according to an IDA press release.

The station is located on a 66-acre parcel adjacent to an NS line. Marquart and the IDA developed the parcel for construction of a 1,365-foot rail spur. Additional spurs are planned for the future, IDA officials said.

To date, the bulk of rail cars that NS has moved at the facility have transported animal feed and other agricultural products, an NS spokesman said in an email. However, other commodities could be shipped through the facility in the future.

"We look forward to continuing to work with the Marquarts, Wyoming County IDA, Chamber of Commerce and the state of New York on this facility, as well as on future development opportunities," said Joseph Torp, NS' industrial development manager, in the email.

NS plans to list the the facility on its distribution solution locator. Although a single siding was initially constructed, there is room for at least one additional track to accommodate expansion, the NS spokesman said.

In 2008, the IDA received a $1.3 million grant from the NYSDOT to improve truck and rail facilities at two Wyoming County sites. The IDA added a $500,00 local share for a multimodal project in the county. Completed in 2012, the project's first phase included the relocation of 2,300 feet of rail track in Arcade to allow for the expansion of local manufacturer Koike Aronson.

The NYSDOT approved the second phase of grant funding in 2015 to allow for the new multimodal rail transfer facility in Gainesville. The state grant, along with the county and IDA's commitments, totaled nearly $1 million for the project, IDA officials said.