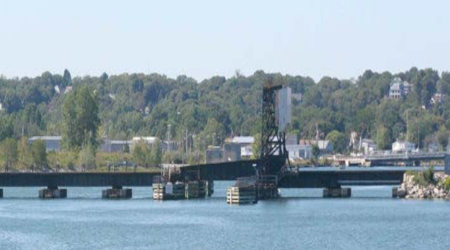 The Massachusetts Bay Transportation Authority's (MBTA) Fiscal and Management Control Board on Monday awarded a nearly $7 million contract to Hardesty & Hanover LLC to design a replacement commuter-rail drawbridge over the Saugus River in Massachusetts.

MBTA's Newburyport/Rockport Line trains travel across the century-old bridge. Although repairs have been made over the years, the structure's condition is deteriorating, agency officials said in a press release.

The new 530-foot bridge will carry two tracks over river and feature a rolling lift "Scherzer-style" bascule draw span. This is the "preferred type" for a small- to medium-span rail bridge, MBTA officials said.

Under the contract, Hardesty & Hanover will provide construction phase services, which will include estimating construction costs and schedules, advertising bid documents and attaining environmental permits. The project is slated to be advertised for construction in fall 2020, with construction expected to take three years.

The replacement bridge is expected to last 75 years, according to the MBTA.

Across North America, other railroads and transit agencies continue to work through engineering and financial challenges to replace century-old bridges, as reported in Progressive Railroading's November 2017 issue.