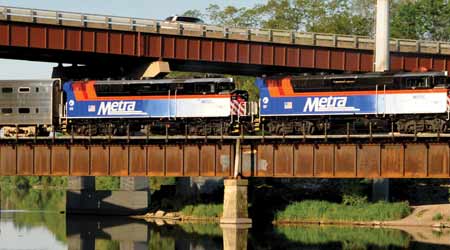 Trains have been rolling across the Fox River Bridge in Elgin, Illinois, for more than a century. While the structure has been regularly maintained over the years, several components have become so deteriorated they can no longer be economically repaired, according to Metra, the bridge’s owner.

Each weekday, 54 Metra trains and up to eight Canadian Pacific trains use the bridge. Built in 1881, the entire single-track structure will soon be replaced with a double-track one. In September, Metra awarded a $21.6 million contract to Illinois Construction Corp. to complete the replacement. The work will begin in the fourth quarter and take three years to complete.

"You get to the point where all you're doing is putting Band-Aids on things that you know you’ve got to replace," says Metra Chief Mechanical Officer Bruce Marcheschi, adding that rail bridges typically last 100 years.

The Fox River Bridge is one of several century-old rail bridges slated for replacement in the near future. Across North America, railroads continue to work through engineering, operational and financial challenges as they advance a host of bridge repair and replacement projects.

For Metra, replacing the Fox River Bridge will help ease congestion on its Milwaukee West Line. The only single-track segment on that line, the 500-foot bridge regularly creates bottlenecks for the Chicago commuter railroad. To cross it, trains must reduce speed to move through switches.

"It's a chokepoint," Marcheschi says. "We can make service a lot more convenient for folks by having two tracks."

Illinois Construction crews will replace the steel, masonry and lumber bridge with an all-steel structure. And unlike the existing bridge, the new one will feature ballast, which will help smooth out the ride. The change also will make it easier for work crews to complete track repairs, such as rail surfacing projects.

Ties on the existing Fox River Bridge are installed directly onto its deck, but modern design standards call for using ballast on bridges, Marcheschi says.

Meanwhile, Amtrak is modernizing a number of bridges on the Northeast Corridor. The national passenger railroad plans to replace five bridges along the route, including the swing-span Portal Bridge that crosses the Hackensack River in New Jersey.

Each day, 450 Amtrak and New Jersey Transit trains cross the bridge, which is prone to frequent mechanical failures that cause delays, said Amtrak spokesman Jason Abrams in an email. In addition, the structure needs to be opened often to allow marine traffic to pass through.

The new bridge will be a fixed-span structure with twice the clearance over the river, which will eliminate the need for the bridge to open and close.

The hunt for funding

The new structure will cost $1.5 billion. Amtrak, NJ Transit, the Port Authority of New York and New Jersey, and the Federal Railroad Administration are expected to cover half of the cost. The project partners are working through the Federal Transit Administration’s Core Capacity grant program for the remaining half, Abrams said.

Design and permitting have been completed for the project, but major construction won’t start until a federal funding commitment is in place.

When it comes to determining if a bridge should be repaired or replaced, Amtrak's engineering team weighs a variety of factors, such as the current condition of the infrastructure and its operational reliability, Abrams said. 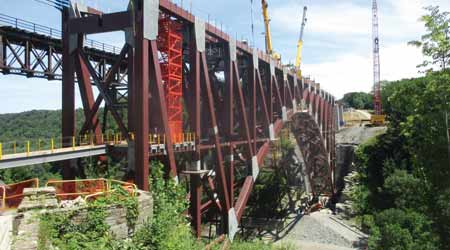 Those limitations can create a bottleneck for traffic moving on NS' Southern Tier Line, which runs between Buffalo and Binghamton, New York, said Swanson.

"The new span's added capacity will benefit customers across NS' network because the Southern Tier Line is a key connector route for markets between the Midwest and New England," he added.

The old bridge is located 75 feet north of the new span. NS expects to begin running trains over the new structure late this month or early next, Swanson said. The entire project — which includes dismantling the old bridge and restoring the surrounding land — is slated to wrap up in 2018.

Modjeski and Masters Inc. designed the new bridge, while the American Bridge Co. is the main construction contractor. Bergmann Associates is serving as NS' on-site engineer to ensure construction is progressing according to plan.

Aside from reducing congestion, the new Portageville Bridge is expected to open up expanded shipping options for NS' customers, particularly in New York's Finger Lakes region.

Still, the project has had its share of engineering challenges. For example, NS needed to blast and remove more than 16,200 cubic yards of weathered and fractured rock from the gorge walls. On the gorge's west side, the contractor needed to use large cranes to remove the rock because there was no vehicular access to the gorge floor.

The Class I faced environmental difficulties, too. The bridge is located in a state park that’s home to two federally endangered animal species: Northern long-eared bats and timber rattlesnakes. The park also is home to bald eagles, a federally protected species.

To reduce construction noise that could disturb a pair of nesting bald eagles, NS adopted a plan to drill bridge foundation piles in lieu of the "more typical method of pounding," Swanson said. The Class I also limited the use of explosives to excavate arch foundations.

Although NS develops an annual budget for bridge work, the railroad typically funds major bridge replacements through a separate line-item budget. NS has provided nearly $60 million for the $72 million Portageville Bridge replacement, while state and local funds will cover the remainder. The project marks the largest public-private development that NS has ever developed for an individual bridge project, Swanson said.

While replacing a bridge is ideal in some situations, it’s not always the right solution.

"A multitude of factors play into the decision to replace a bridge, with load-carrying capacity being a primary consideration," Swanson said. "NS aims to rehabilitate bridges rather than replace them when it makes economic sense and ensures continued safe rail operations."

For MTA Long Island Rail Road (LIRR), replacing the Post Avenue Bridge in Westbury, New York, was the best way to continue safe operations. Within recent years, dozens of tall trucks have struck the bottom of the century-old structure, leading to delays as crews verified the bridge’s structural stability before resuming train service.

Paving the way for new service

What's more, the two-track bridge has been expanded to make way for a third track. As part of LIRR's major expansion project on its main line, the railroad is constructing a third track along a 9.8-mile stretch between Floral Park and Hicksville, New York. The additional track will enable LIRR to provide bidirectional service during peak hours.

"The biggest challenge on any bridge replacement project is to minimize the impacts to the customers and public," said LIRR spokeswoman Sarah Armaghan via email.

To overcome that obstacle, LIRR removed the existing structure and installed the new one during a single weekend track outage in late October. The railroad also kept the public informed of the project through fliers, radio ads and social media posts, Armaghan said.

On the other side of the United States, BNSF Railway Co. recently completed a $20 million project to replace the Washougal River Bridge in Camas, Washington.

During two, 32-hour maintenance periods, the railroad’s engineering team used hydraulic jacks to lift and pull out the old trusses. Crews then slid in the new bridge spans.

BNSF planned the bridge replacement, but the work itself was done entirely by a contractor, said spokeswoman Jessa Lewis in an email.

"Generally speaking, we use contractors when a project is of a magnitude that requires a sizable workforce presence for an extended period of time," she added.

Kansas City Southern relies on a similar approach for its bridge projects. The work is completed both in-house and with contractors, such as Austin Road and Bridge, Koppers and CWW Contractors, said KCS spokeswoman Doniele Carlson in an email.

KCS has set aside $250 million for its 2017 maintenance-of-way budget. Of that total, $25 million was dedicated to bridge projects. This year, the railroad is replacing bridges near Eve, Missouri; Texarkana, Cass and Laredo, Texas; and Leesville, Singer and Sorrento, Louisiana.