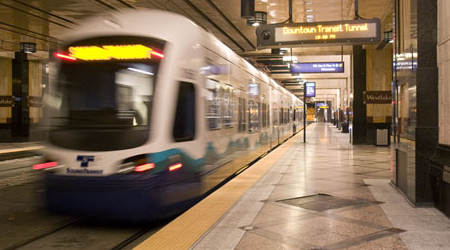 The units will support the opening of the Link light-rail extension to Federal Way and downtown Redmond, Wash., in 2024, agency officials said in a press release.

"With population and job growth booming across much of the Puget Sound region, we're acting now to bolster our light-rail fleet so we can better serve the public and an expanding transit system," said Sound Transit Chair Dave Somers. "Also, by buying now, Sound Transit can save money in the long term."

The first vehicles from the original order are slated for delivery in mid-2019, with subsequent units arriving on a staggered schedule of two to three vehicles per month through 2024's first quarter.

As originally planned, 40 vehicles will be delivered and tested in time for the Northgate Link extension opening in 2021.

To be manufactured in Sacramento, Calif., the new units will features several improvements in on-board systems and passenger amenities, including larger windows, extra standing room in the center aisle, four bicycle hooks and more space under seats to stow luggage.

Sound Transit needs to triple the size of its current fleet as it adds 94 miles of voter-approved light-rail extensions over the next two decades, agency officials said. By 2041, the agency expects to operate more than 116 miles of light-rail lines.

"The greatest potential for improvements falls in the planning, environmental and permitting phases of projects," Sound Transit officials said.

Internally, the agency will focus on integrating work functions across across departments to eliminate department hand-offs between project phases. Additionally, Sound Transit will co-locate staff for each project in the same work space to increase efficiency.