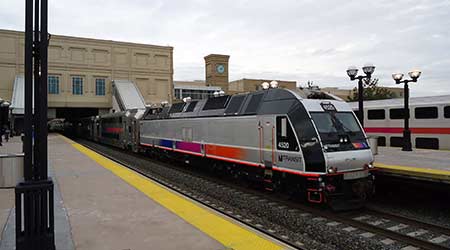 New Jersey Transit's board yesterday approved the purchase of 17 dual-powered locomotives from Bombardier Transit Corp. that will enable the agency to retire some of its oldest units.

The 17 ALP45 locomotives will be bought for a total contract authorization of $184.5 million under a 2008 contract with Bombardier, NJ Transit officials said in a press release.

The new units will replace NJ Transit's aging fleet of GP40 and F40-series locomotives, which were manufactured in the late 1960s. The older locomotives are becoming too expensive to maintain and functionally obsolete, especially when pulling larger, heavier multilevel passenger coaches, agency officials said.

"The addition of these new dual-powered locomotives continues our effort to modernize our rail fleet,” said Executive Director Steven Santoro. "These locomotives can operate across the entire rail system in either electric or diesel mode providing us with greater versatility and operating efficiency."

The first locomotive was delivered in December 2011. The introduction of the dual-powered ALP45s in 2011 marked a first for this technology in the United States, NJ Transit officials said.

The ALP45 locomotives are designed to operate push-pull passenger service at speeds up to 125 mph in electric mode and up to 100 mph in diesel mode.

They'll meet the current U.S. Environmental Protection Agency Tier 4 requirements, reducing emissions compared to the locomotives to be replaced when operating in diesel mode, and producing no emissions when operating in electric mode, agency officials said.