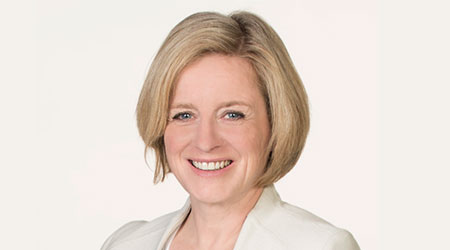 The Alberta Petroleum Marketing Commission has engaged a third party to negotiate with rail manufacturers and suppliers for the expanded capacity, which would include new tank cars, Notley said in a press release.

The extra capacity would allow the province to transport 30 percent more crude by rail. That would help narrow the oil price gap by up to $4 per barrel, which would generate more than $1 million per day in new federal revenue and provide smaller producers a "more affordable option" to move their oil to market, Notley said.

The commission is seeking to enter into commercial agreements to obtain rail service from railroads in the form of locomotives, staff and track capacity; tank cars from midstream suppliers; on-load capacity in Alberta to load oil into tank cars; and off-loading capacity to unload the cars at destinations.

Terms of the agreements are expected to be settled in the next few weeks.

During a press conference, Notley said the crude-by-rail capacity expansion is a stop-gap solution to Alberta's depressed oil prices, the Global News reported.

"Additional rail is only a short- and medium-term measure. But until pipelines are built, we need to move more oil by rail," she said, according to the newspaper.

The plunging price of oil has reached a "crisis point" for her province, so her government is prepared to expand rail capacity with or without the federal government's help, she said.