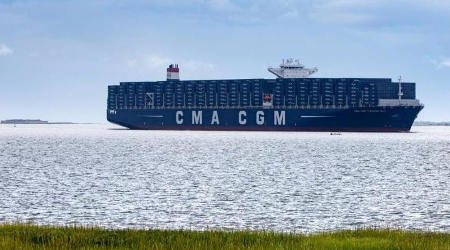 The 1,200-foot CMA CGM Theodore Roosevelt — which has a capacity of 14,400 20-foot equivalent units (TEUs) — arrived on the heels of the first construction contract for the Charleston Harbor deepening project being awarded by the U.S. Army Corps of Engineers, port officials said in a press release.

Yesterday, the Army Corps said it awarded a $47 million construction contract to begin dredging work on the entrance channel, which will be deepened to 54 feet. It is the first of two contracts to be let for entrance channel dredging.

The main shipping channel will be deepened to 52 feet, which will offer unfettered access to 13,000 to 14,000 TEU-carry vessels, port officials said.

The Theodore Roosevelt's arrival is a "timely and visible example" of the project's importance, said Jim Newsome, the authority's president and chief executive officer.

"Our harbor will ultimately be the deepest on the East Coast, allowing vessels like the Roosevelt to transit without tidal restriction," Newsome said. "Today reaffirms our efforts and investments in terminals and infrastructure to prepare for the big ships being deployed to the East Coast following the Panama Canal expansion and completion of the new Bayonne Bridge."

Last month, the Theodore Roosevelt called on Norfolk Harbor at the Port of Virginia.