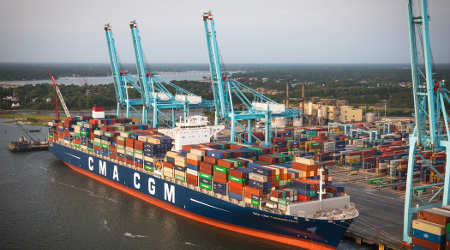 The largest container ship to arrive on the U.S. East Coast made its first stop yesterday at the Port of Virginia.

The 1,200-foot CMA CGM Theodore Roosevelt, which has a capacity of 14,400 20-foot equivalent units (TEUs), was guided through the Norfolk Harbor yesterday morning, port officials announced in a press release.

The vessel's size exceeds that of the COSCO Development, which sailed into the harbor carrying 13,092 TEUs in May.

"In Virginia, the big-ship era started in May and we continue to see larger and larger vessels," said John Reinhart, chief executive officer and executive director of the Virginia Port Authority.

The $670 million that the authority is investing to expand Virginia International Gateway (VIG) and Norfolk International Terminals (NIT) will enhance the port's readiness to handle big ships and their increasing cargo loads, Reinhart said.

France-based CMA CGM is part of the OCEAN Alliance, which is an alliance of ocean carriers composed of COSCO, Evergreen Line and OOCL.