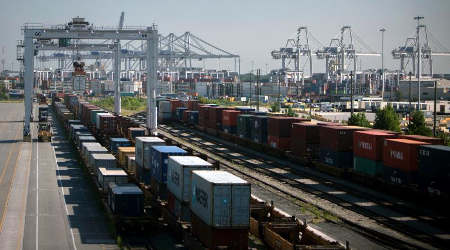 The Georgia Ports Authority's (GPA) board yesterday approved $92 million for the Mason Mega Rail Terminal project at the Port of Savannah.

The project will double the Port of Savannah's annual rail capacity to 1 million containers. Work approved yesterday includes 124,000 feet of new track, 88 automated switches and rail control devices, as well as the rail and power infrastructure to support the operation of rail-mounted gantry cranes, GPA officials said in a press release.

"It is no accident the GPA is constructing rail capacity as the demand for rail is growing," said GPA Chairman Jimmy Allgood. "As part of our strategic planning two years ago, our team identified the growing role intermodal cargo would play in GPA's long-term success and put into place this plan for expansion."

GPA officials broke ground on the project, expected to cost $127 million, in March. The new terminal will begin to come online by fall 2019, with project completion slated for fall 2020.