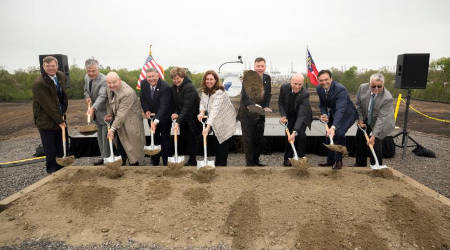 The project will increase the Port of Savannah's rail lift capacity to 1 million containers per year, and open new markets that will span an arc of cities from Memphis, Tennessee, to St. Louis, and from Chicago to Cincinnati, port officials said in a press release.

The first half of 2018, work will focus on construction of two rail bridges with a total of seven tracks that will connect two existing intermodal container transfer facilities.

GPA officials anticipate the new terminal will begin coming online by fall 2019, with project completion in the fall 2020.

When the project is completed, Garden City Terminal will have 180,000 feet of rail, 18 working tracks and the capability of building 10,000-foot unit trains on terminal. The expansion will allow GPA to bring all rail switching onto the terminal, avoiding the use of nearly two dozen rail crossings — including those on state Highways 21 and 25 — for improved vehicle traffic flow.

The Mason Mega Rail expansion is funded in part by a $44 million U.S. Department of Transportation FASTLANE grant administered by the U.S. Maritime Administration. In 2017, the department changed the name of FASTLANE to the Infrastructure for Rebuilding America (INFRA) program.