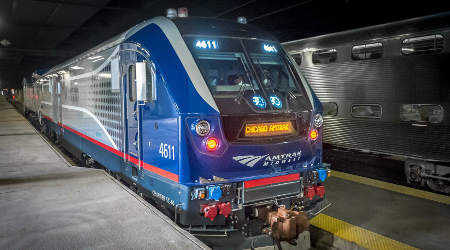 The maximum speed on the Amtrak-owned route between Porter and Kalamazoo, Michigan, is 110 mph. On the MDOT-owned portion, the maximum speed is 79 mph, but it's expected to bump up to 110 mph this year after the completion of positive train control testing and the rollout of new Siemens Charger locomotives.

On the Wolverine service from Detroit to Chicago, MDOT has logged a 20-minute reduction in travel time, The Times Herald reported.

In 2012, MDOT purchased 135 miles of the rail corridor between Kalamazoo and Dearborn from Norfolk Southern Railway. Using $347 million in federal funds, the department replaced worn track and smoothed curves for higher speeds, upgraded crossings and signals, and upgraded the train signaling and communication system.

"At MDOT's direction, Amtrak work crews have corrected years of deferred maintenance and have taken over dispatching," said Joe McHugh, Amtrak vice president of state-supported services. "We have created the longest railroad segment outside the northeast that is being made ready for an even more reliable and faster Amtrak service."