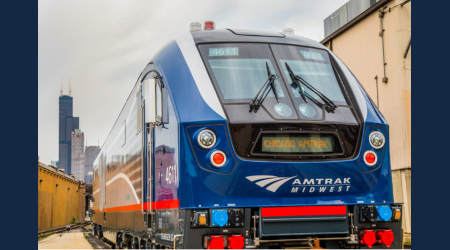 The units are slated to operate on state-sponsored routes in the Midwest. The locomotives feature the new "Amtrak Midwest" logo to promote the five-state network of trains, Amtrak officials said in a press release.

The first unit was unveiled yesterday at Union Station in Chicago.

After all 33 locomotives are delivered, they will be deployed:
• from Chicago on the Lincoln Service, Illini/Saluki and Illinois Zephyr/Carl Sandburg to and from downstate Illinois;
• on the Hiawatha service in Illinois and Wisconsin;
• on the Wolverine Service/Blue Water/Pere Marquette to and from Michigan; and
• on the Missouri River Runner between Kansas City and St. Louis.

"These are among the nation's cleanest locomotives and we're proud to have not only worked closely with Amtrak and the state departments of transportation to bring these to the Midwest, but also our robust chain of suppliers from across the country," said Armin Kick, Siemens Mobility vice president for locomotives.

Powered by a Cummins QSK95 diesel engine, the locomotives will be able to operate at speeds up to 125 mph, with faster acceleration and braking for better on-time reliability, Amtrak officials said.

The locomotives were purchased with $216.5 million in federal funds.