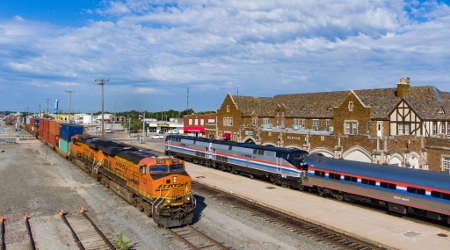 According to a news release issued by the senator's office, Amtrak Chief Operating Officer Scot Naparstek yesterday told the Senate Commerce Committee that the railroad will continue to run Southwest Chief service "as is" in fiscal year 2019. Amtrak previously proposed replacing a large portion of the line with bus service.

In June, Udall, U.S. Sen. Jerry Moran (R-Kan.) and other senators wrote to Amtrak management about concerns that the Southwest Chief rail service would be discontinued or replaced with buses. The route, which operates between Los Angeles and Chicago, passes through New Mexico, Kansas and Missouri.

At yesterday's hearing, Udall also emphasized the necessity of making improvements to the aging Southwest Chief Line, according to the senator's news release.

"I reiterate the need for Amtrak to work with the communities impacted to create a real plan for the future of the Southwest Chief," he said, according to the release.

The Senate's FY-2019 appropriations bill, which was approved in August, includes an amendment to provide $50 million to continue Southwest Chief service.

Concerns over the Southwest Chief's future are part of broader concerns in some communities over the future of Amtrak's long-distance service.