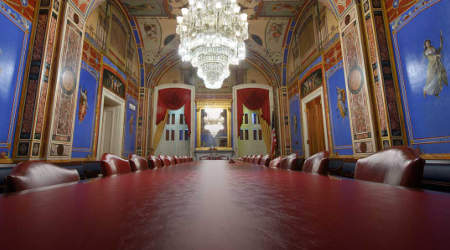 The rail and transit funding levels are $1.3 billion more than authorized by the Fixing America's Surface Transportation (FAST) Act for FY2019, according to a press release issued by the American Public Transportation Association (APTA).

The bill also funds the Federal Transit Administration's Capital Investment Grants program at $2.5 billion, marking a $92 million decrease from FY18, according to a statement issued by nonprofit advocacy group Transportation for America.

The bill also specifically directs the U.S. Department of Transportation to administer the program as it was under 2016 in response to attempted changes that would have added "greater financial and administrative burdens on local communities," Transportation for America officials said.

The amendment would provide the resources needed for maintenance and safety improvements along the route, according to a press release issued by Moran's office.

The senators' amendment also would "effectively reverse" Amtrak's decision to substitute rail service with buses over large segments of the route through FY19, Moran's release stated. In June, Moran, Udall and other senators wrote to Amtrak management about concerns that Amtrak might discontinue Southwest Chief service.

"As the divide between urban and rural communities in America continues to expand, passenger-rail services like the Southwest Chief are invaluable in connecting Kansans to the rest of the country while also bringing visitors from out of state to our local communities," Moran said.

In late May, the U.S. House Appropriations Committee approved its own version of the THUD bill, which has yet to be brought before the full House of Representatives for a vote.