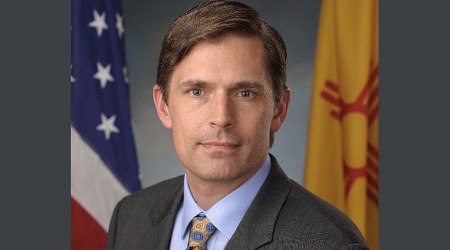 A bipartisan group of U.S. lawmakers have expressed concerns to Amtrak leadership about the railroad's interest in maintaining its Southwest Chief route and long-distance passenger service.

U.S. Sen. Martin Heinrich (D-N.M.) led the group in writing to Amtrak President and Chief Executive Officer Richard Anderson about the lawmakers' concerns that Amtrak is considering withholding funding for the Southwest Chief route until additional financial investments in the route's infrastructure are made.

"The Southwest Chief is vital to the economic well-being of our communities. In many cases, the line is the only affordable alternative transportation option to the highways for our citizens, and is an important link to public and private services in larger cities along the route for rural residents, including the elderly and disabled," the letter states.

The lawmakers described Amtrak's lack of transparency about its changing position on the route as "troubling."

"We request Amtrak take the lead in developing cooperative plans to ensure the Southwest Chief’s successful operation, including seeking funding from the various federal grant programs established to address these specific issues," the letter reads.

Amtrak has put conditions on its decision to contribute funds toward a Southwest Chief project, according to a report by The Hill.

The lawmakers' letter is in response to a message the national intercity passenger railroad sent to Congress responding to questions about the route's future. Amtrak, in its remarks to lawmakers, referenced a letter sent last year to the Colfax County Commission in New Mexico, in which the railroad said it would withhold matching funds for the route's rehab project until other stakeholders invest in infrastructure, The Hill reported.