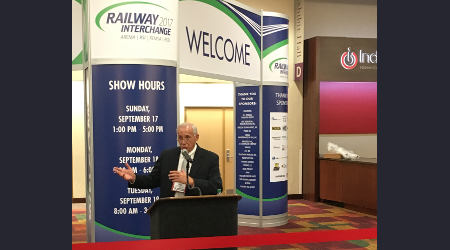 Drudy noted that this year's event would be "an unusual show" in the aftermath of Hurricane Irma, which caused severe damage to Florida and Carribbean islands. Some companies' representatives were unable to make it to Interchange as their employees dealt with storm damage. As a result, attendees saw a few empty booths on the floor.

Despite the storm's impact, Drudy said he still received phone calls from industry colleagues checking in on him personally. RSSI is headquartered in Jacksonville, Florida.

"This is our industry," said Drudy, reflecting on the camaraderie of railroaders.

As the conference continued yesterday, the Exhibition Hall became a hub of activity, with several companies announcing new products. Among the highlights:

• Georgetown Rail Equipment Co. (GREX) unveiled its Aurora Xiv™ high-rail track vehicle, which combines the company's Aurora®, Aurora Xi and BallastSaver® technologies into one truck. Moving at 25 mph, the new vehicle can grade wood or concrete ties and inspect the internal structure of track components. The truck also uses BallastSaver to identify ballast deficiencies and issues with the clearance envelope. 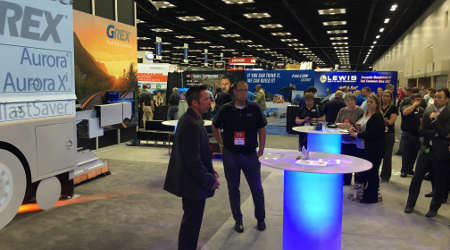 • Progress Rail announced today that it has reached a preliminary agreement to supply its first Guardian End-of-Train (EOT) devices to Norfolk Southern Railway. The devices transmit real-time vital information from the train's end to the locomotive cab through a locomotive head-of-train device or locomotive cab units (LCUs), according to a Progress Rail press release. The company will deliver the devices for use on NS' fleet by the year's end. Progress Rail earlier this year purchased the intellectual property of Wise Electronics, a company specializing in advanced technologies such as LCUs and EOT devices.

• GE Transportation received an order for its 10,000th Evolution Series locomotive. The units are compliant with the Environmental Protection Agency's Tier 4 emissions standards. The latest order demonstrates "how well these locomotives perform in the field and meet the needs of the industry," said GE Transportation President and Chief Executive Officer Jamie Miller.

Railway Interchange 2017 is taking place at the Indiana Convention Center in Indianapolis. The event will wrap up tomorrow.