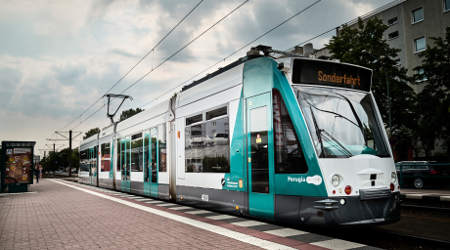 Siemens Mobility will unveil the world's first autonomous tram at InnoTrans 2018, slated to run Sept. 18-21 in Berlin, Germany. The company will demonstrate the unit on a 3.7-mile section of the tram network in Potsdam, Germany. Local transit agency ViP Verkehrsbetrieb Potsdam GmbH has provided a Siemens Combino tram for the project. The experimental vehicle is equipped with multiple lidar, radar and camera sensors to serve as its "digital eyes." Using artificial intelligence, the tram responds to trackside signals and reacts to hazards such as crossing pedestrians and other vehicles.

Alstom has signed a framework contract with Syndicat des Transports de l'Agglomeration Lyonnaise (SYTRAL) in Lyon, France, for 11 streetcars. The first order in is valued at more than $46.37 million, according to an Alstom press release. The agency may place other orders depending on future needs. The units will be used to boost capacity on line T4 of the Lyon agglomeration's tramway network. The streetcars' design will be identical to the 92 vehicles now operating on the Lyon network. The first unit is slated for delivery before 2019's end.

Koppers Holdings Inc. has increased the size of its board from eight to 11 directors. The three new members are Traci Jensen, senior vice president of global construction adhesives at H.B. Fuller Co.; David Motley, general partner with BlueTree Venture Fund; and Sonja Wilkerson, senior VP of human resources at Infinera Corp. Under the age restriction criteria of the company's corporate governance guidelines, Cynthia Baldwin and T. Michael Young won't be eligible for reelection at Koppers 2019 annual meeting. As a result, they'll retire on the meeting date, reducing the size of the board from 11 to nine directors.

Ron Rothman has joined SightLogix's board. He has more than 30 years of security leadership, including a five-year stint as president of the Honeywell Security Group & ADI Distribution. Most recently, Rothman served as senior vice president of sales and business development for AFA Protective Systems. SightLogix manufactures "smart" thermal cameras used to protect assets in the transportation, energy, chemical, utility and other industries.