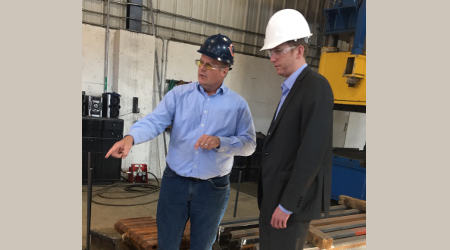 During the tour, Atlantic Track Regional Vice President Dave Francis and Plant Manager George Perelli gave an overview of the company and its current operations.

Atlantic Track's plant in Richmond was built in 1982 and expanded in 2010. It is certified under the Association of American Railroads' M-1003 Quality Assurance program, as well as the ISO 9001 quality management system.

Construction began on the Rochester Intermodal Station in October 2014. Expected to be completed in summer, the new station will help reduce regional delays by expanding track service, according to a press release issued by Slaughter's office.

The station also will be larger and feature a new and redesigned concourse. The station, concourse, platform and passenger information display systems will be compliant with the Americans with Disabilities Act, Slaughter's release said.

The Pike Co. Inc. is leading a team on the station's design and construction.