TC&W's mainline extends from the Twin Cities to Milbank, S.D., and its branch lines serve grain terminals on the Mississippi River at Camden Place and Savage, Minn. The short line operates 294 miles of track in Minnesota and 49 miles in South Dakota, and interchanges with BNSF Railway Co., Canadian Pacific, CN and Union Pacific Railroad. The railroad employs more than 85 people. 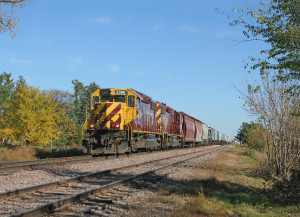 Twenty-five years after its founding, the railroad has moved almost $1.5 billion worth of goods from Minnesota farms and manufacturers to markets in 39 states, as well as points in Canada and Mexico, TC&W officials said in a press release.

"We have been very fortunate to have the support of the communities we serve and their elected representatives," said TC&W President Mark Wegner. "They have created a positive business environment that has enabled our customers to invest over $500 million in new or upgraded production, processing and shipping facilities along [our] line."