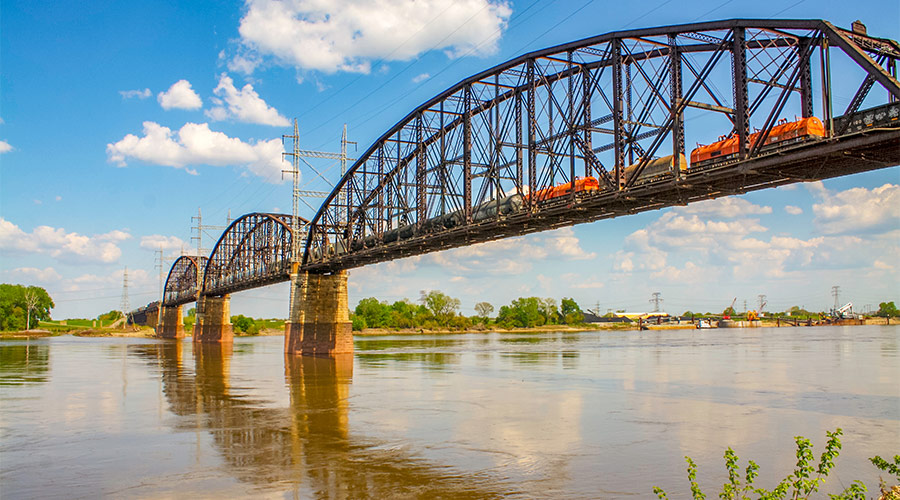 The Federal Railroad Administration (FRA) has awarded the Terminal Railroad Association of St. Louis (TRRA) a $21.5 million grant to be used for the rehabilitation and reconstruction of the Merchants Bridge.

The grant was awarded for fiscal-year 2019 under the Consolidated Rail Infrastructure and Safety Improvements program.

"The awarded funds are critical to maintaining the current level of service to cargoes shipped by rail and passengers on Amtrak, which in turn reduces congestion and wear and tear on the region’s highways," said TRRA President Mike McCarthy in a press release.

Built in 1890 to serve the St. Louis region, the bridge is load restricted, which allows traffic on only one of its two main tracks, TRRA officials said.

The $220 million project calls for removal and replacement of the three main spans over the Mississippi River, seismic retrofitting of the piers and rehabilitation of the east approach, they said. The bridge's west approach was rebuilt in 2016.

When completed, the bridge will allow for more freight being transported by rail instead of by truck, as well as reduce the wait time for trains to travel across the bridge.

The TRRA will provide 90 percent of the cost to replace the bridge. The project began in 2019 and is expected to be completed in 2023.

Bridge spans will be constructed near the project site and floated into place after the existing structures are floated out, thereby shortening down time to ensure continued efficient rail and river operations in the region, railroad officials said.