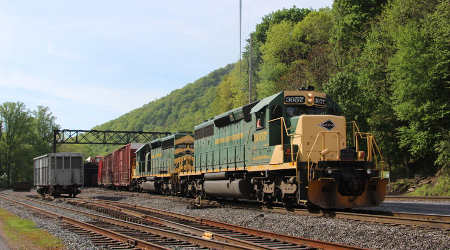 Anthracite coal movements registered the most growth among carloads in 2018, R&N officials said in a press release. The regional's coal business grew in response to increased demand by domestic producers of electric arc furnace steel producers. That growth helped offset losses in certain coal lanes due to plant fires and a decline in export coal moves to the Ukraine, R&N officials said.

Moreover, the railroad last year finally began to realize the promise of delivering dried coal to steel producers, they said. In the Hazleton Shaft — a project that took seven years to complete — the railroad originated more than 1,300 carloads. Business out of the shaft, which now is known as Atlantic Coal, is set to dramatically increase this year and beyond, R&N officials added.

Meanwhile, forest products business last year remained the regional's largest source of income. The railroad recently purchased its first warehouse in Ransom, Pennsylvania. The facility will enable woodpulp and other forest products producers to ship their raw materials via Norfolk Southern Railway or Canadian Pacific to a central location, where it can be shipped by rail or truck, R&N officials said.

"The warehouse acquisition is part of [our] broader strategy to get more involved in transloading and distribution services," they said. "In addition to acquiring the warehouse, [we] also opened a new transload site for pipe and went into the intra-state trucking business in 2018."

This year, R&N plans to install eight switches and construct 2 miles of sidings because of four large customer development projects that are already booked, railroad officials said. The regional also expects to purchase 150 to 250 additional freight cars this year for growing coal business after acquiring four more locomotives in 2018.