BNSF honors Kiamichi as 'Short Line of the Year' 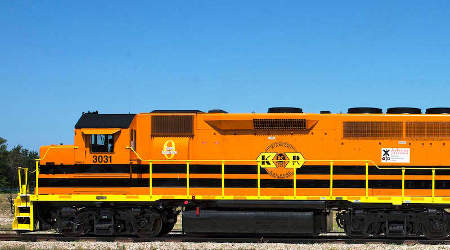 BNSF Railway Co. has designated Kiamichi Railroad Co. as the Class I's 2018 Short Line of the Year for its commitment to "safety, service, growth, investment and velocity."

A subsidiary of Genesee & Wyoming Inc., Kiamichi is a Class III serving Texas, Oklahoma and Arkansas, interchanging with BNSF in Madill, Oklahoma.

"Kiamichi's employee safety record, including an impressive injury-free streak, is a testament to their focus on safe rail operations," said Merril Lieb, assistant vice president of BNSF's short-line development, in a press release. "The railroad has also made significant investments in their infrastructure that led to a 300 percent growth in their carload business with BNSF."

Since 2012, Kiamichi has improved much of its 265-mile line to handle 286,000-pound loads of traffic, including upgrading 150 miles of track and investing more than $35 million. With BNSF, Kiamichi worked to capture market share in aggregates, fluff pulp and coal, BNSF officials said.

"We are a customer-focused railroad and have worked diligently to help our existing customers grow while bringing more businesses to our rail line," said Kiamichi General Manager Ryan Englebright. "We have seen growth in transload facilities and attracted a new steel mill."