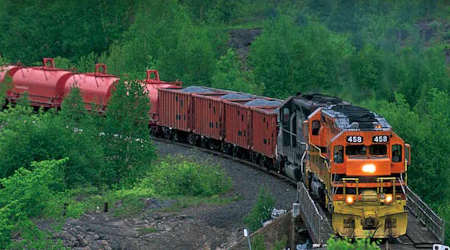 The announcement follows the "recent refusal of support" from Transport Canada's National Trade Corridors Fund, according to a G&W Canada press release.

"Changes in commodity demand resulting in carload declines, coupled with increased maintenance and regulatory compliance costs have made the railroad economically unviable without strategic investments from government," the release stated. "While the Ontario provincial government has provided interim funding through a regional development agency, this will not support the line's operations beyond the end of the year."

The northern Ontario short line operates under a 1997 lease agreement with Canadian Pacific and serves major employers in the region, including Domtar, Algoma Steel and Eacom.

In 2010, Huron Central received federal and provincial funding toward maintenance and rehabilitation costs to keep the rail line running until 2015. During that time, the company contributed three times more than anticipated to keep the railway "safe and operational" through this year.

"We are obviously disappointed with this turn of events," said Louis Gravel, president of Genesee & Wyoming Canada. "We have done everything in our power to keep HCRY in operation, but both the provincial and federal governments have turned a deaf ear on the situation."

Company officials are calling on the provincial and federal governments to reconsider their support of the short line.

"Many of our key customers rely on the railway as the only viable transportation option," noted Gravel. "Closure of the railway eliminates the potential for regional economic development opportunities in the North, along with other public benefits, including reduction in pollution levels and road maintenance costs, as transport trucks will fill the gap left behind by HCRY."

In advocating for support last fall, G&W said it needed a combined CA$46.2 million over five years from both governments to pay for track upkeep and repairs, and to make federally mandated safety upgrades on infrastructure, according to a Northern Ontario Business news report.