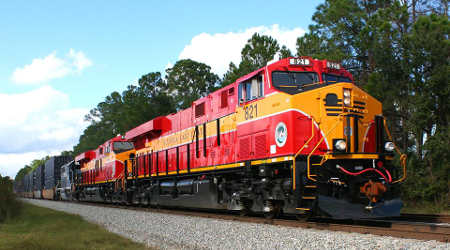 Fortress Investment Group, the parent of Florida East Coast Railway (FECR) and TRAC Intermodal, is being acquired by SoftBank Group Corp. (SBG) of Japan for $3.3 billion in cash, the companies announced this week.

SBG and Fortress have entered into a definitive merger agreement, which was unanimously approved by a special committee of independent directors of both companies' boards, according to a jointly issued press release.

Pete Briger, Wes Edens and Randy Nardone have agreed to continue to lead Fortress. They will invest 50 percent of their after-tax proceeds from the acquisition in Fortress-managed funds and vehicles.

"We join a company with tremendous scale and resources, and a culture completely aligned with our focus on performance, service and innovation," said Fortress Co-Chairmen Briger and Edens. "We anticipate substantial benefits for our investors and business as a whole, and we have never been more optimistic about our prospects going forward."

Subject to Fortress shareholder and regulatory approvals and other closing conditions, the agreement is expected to close in the second half of 2017.

What the acquisition might mean for FECR is not yet clear. Last fall, Fortress was reported by Bloomberg to be exploring a sale of the railway, which it acquired in 2007.

TRAC Intermodal is an intermodal chassis pool manager and equipment supplier for domestic and international transportation companies. Its active fleet consists of more than 267,000 chassis.