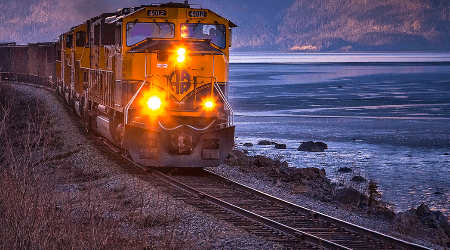 Alaska Railroad Corp. (ARRC) late last week announced it has eliminated 49 positions and carried out other cost cutting measures as part of a major corporate restructuring in response to a downturn in its freight business.

ARRC has recorded a 44 percent drop in freight tonnage since 2008 and posted a net loss from operations since 2015. The 2017 budget shows a loss of $4.9 million, ARRC officials said in a press release.

ARRC officials cited several factors for the railroad's financial difficulties, including:
• low oil prices have led to a significant drop in the railroad's revenue from oil industry customers;
• loss of export coal business resulted in the closure of the coal export facility in Seward;
• an 84 percent drop in refined petroleum business prompted the closure and dismantling of the North Pole refinery;
• a significant drop in revenue from other key customers stemming from Alaska's recession;
• increased labor and benefit costs largely due to rising health care costs; and
• increased resources needed to comply with regulations, such as positive train control.

"Hard decisions had to be made to ensure the Alaska Railroad can continue to provide critical transportation services to the state," said Chairman Jon Cook. "Our management team, along with the railroad board of directors, focused on safety, customer service and meeting regulatory requirements as decisions were made. Of utmost importance is our ongoing commitment to provide exemplary service to our passengers, freight and real estate customers."

Since 2008, ARRC has trimmed its year-round workforce by 300 positions.