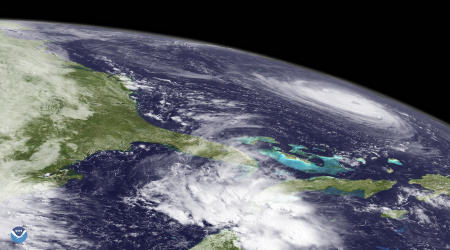 Freight railroads are taking direct action to protect employees, customers and infrastructure that are in the potential path of Hurricane Florence, the Association of American Railroads (AAR) announced yesterday.

As the nation prepares for what could be the first Category 4 hurricane of the season to hit the eastern seaboard, railroads have been working with the Department of Homeland Security, Federal Emergency Management Agency and the Federal Railroad Administration to monitor the storm's path and potential effects, AAR officials said in an announcement.

Railroads have established command posts to coordinate hurricane preparations, implement contingency plans, conduct impact assessments and initiate response actions. Those initiatives include:
• removing locomotives and rail cars from yards and areas at risk of flooding;
• rerouting traffic out of areas likely to be affected;
• staging rail employees, equipment and materials to areas surrounding the projected track of the storm to enable prompt response and recovery actions; and
• continuous updates to customers on storm preparations, potential service disruptions and projected restoration of service.

In addition, railroads are working with local, state and federal officials to ensure they can deploy teams to inspect, assess and, as needed, clear, repair or restore damaged infrastructure to enable resumption of safe train operations as quickly as possible.

If necessary, railroads may bolster local relief efforts by delivering food, water and lumber to affected areas, as well as moving debris caused by storm damage.

Meanwhile, individual railroads have begun posting service alerts on their websites. Norfolk Southern Railway announced it will issue embargoes for affected locations based on the current projections from the National Hurricane Center.

"Traffic en route to these locations will be held at yards throughout the Norfolk Southern system," the NS alert stated. "Additionally, Norfolk Southern is staging resources including ballast trains, equipment and generators, and will be prepared to commence storm recovery efforts once it is safe to do so."