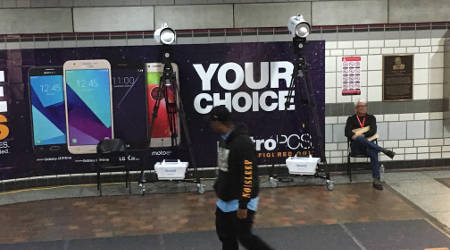 The testing, which took place at the 7th/Metro Station in downtown L.A., was part of Metro's ongoing efforts to test different technologies to improve security on the transit system, agency officials wrote in a blog post.

Known as a "stand-off explosive detection unit," the system triggers an alarm if an individual carrying or wearing an improvised explosive device passes by, TSA officials said in a press release.

Transit agencies can use the screening technology to detect potential threats by identifying objects that block the naturally occurring emissions from a person's body.

TSA supplied the equipment for the demonstration, while Metro employees operated the system.

"Along with industry partners, we are committed to identifying, testing and deploying technology that addresses threats to transportation across the spectrum," said TSA Administrator David Pekoske. "We need to innovate and evolve faster than the adversary, and more importantly, deploy technology ahead of the threat-curve."

Earlier this month, an alleged terrorist set off a pipe bomb attached to his torso as he walked between subway stations beneath Times Square in New York City.

In August, Metro tested a different type of explosive detection unit called Evolv at the west entrance to the Red/Purple Line at L.A.'s Union Station.